There are a number of trees in San Diego that are known hosts of Shot Hole Borer. The polyphagous Shot Hole Borer is a kind of ambrosia beetle that has invaded hundreds of trees across southern California. These beetles fetch fungal spores that can contaminate or kill a subset of trees. Primarily, Shot hole borers get attracted to stressed or injured trees.

These beetles bore into trees to form galleries in sapwood, wherein they inoculate symbiotic fungi, in particular, Graphium and Fusarium euwallaceae, which are primary nutrient sources for larvae. At the initial stage of beetle colonization, there are no visible injuries to the bark. The symptoms of Shot Hole Borer vary depending upon the tree type and intensity of infestation; besides that, some tree species may also show natural resistance against these borers. Typical symptoms of Shot Hole Borer include pinholes in bark, sawdust-like powder, frass, etc. But uncontrolled beetle infestation in San Diego has increased the tree mortality rate.

Shot Hole Borer are reliant on their fungi; therefore, our Tree Doctor experts target the borers’ main source of food, which further helps to reduce the population of these dangerous beetles. To deal with significant damage, arborists try to control it by using insecticide and sanitation of infected trees. We also help you to keep your tree healthy by providing enough nutrients, so in the future, this kind of infestation can be avoided.

Early detection of Shot Hole Borer infestations is the key to controlling these pests. Get your trees checked regularly with the help of certified arborists from Tree Doctor USA.

Trunk injections are injected that contain insecticides and fungicides to protect the tree from Shot Hole Borer, and these treatments are effective for 2-year. We also use soil surfactants to encourage root growth.

The primary hosts usually are woodpiles and stumps. We check seriously damaged trees, and if needed, we remove them from the vicinity to prevent further infestation.

To contain the infestation, we assess the tree limbs. Upon detecting any signs of pests, we accurately treat them by following all safety standards.

We understand your trees’ natural habitat, and based on that, we provide mineral nutrients to enhance the tree’s vitality and vegetation growth.

We chip infested wood to a size of 1 inch or dispose of it by composting, burning at a bio generation facility, or solarizing under a clear tarp. 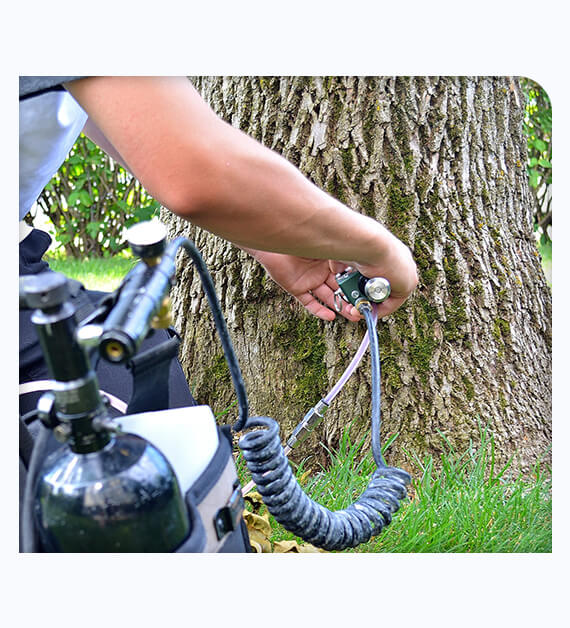 Protect Your Trees from Shot Hole Borer in San Diego

In San Diego and across Southern California, Shot Hole Borer infestations have reached the epidemic level. It affects urban, suburban, and riparian trees beside the forest. There are chances that it may affect agricultural land soon. These borers have reportedly attacked plenty of agricultural, native, and exotic trees. These beetles are capable of infesting trees anywhere. Healthy trees may stand a chance against these beetles, but stressed trees are most likely to get infected. To prevent such type hazardous infestation, you should schedule an appointment with a Tree Doctor USA to control the Shot Hole Borer infestation in San Diego.

State-of-the-art resources and tools of Tree Doctor USA ensure tree health and eliminate the infestation. Our tree health care services are more durable and efficient. Even if you need to control pest infestation or for optimum tree health, our dedicated programs for tree care can address all your concerns within your budget and given timeline.

Experts of Tree Doctor USA have been providing its services in San Diego County for many years. Our arborists know exactly what to look for while assessing the tree and help you to identify any type of disease and provide effective treatment depending upon the severity of the disease.

Protect your tree from hazardous Shot Hole Borer by availing Tree Doctor USA services at a reasonable cost, Contact us today on (760) 285 0099 !