Shot hole borer beetles are bad news for your fruit trees. Unlike other Ambrosia beetles, Polyphagous Shot Hole Borer seems to attack healthy trees. They develop under the bark and dig tunnels to excavate in and out of the tree. The girdling wounds weaken trees and sometimes even kill the tree. If not treated at the right time, the trees beyond the damage have irreversible effects.

The characteristics of invasive Shot Hole Borer attack and infestation vary among tree species. The repeated attack of these fungi can weaken the tree, and hence, methodological treatment of Shot hole borer from professionals is crucial.

Exotic and invasive Shot hole borers or fruit-tree bark beetles have spread over most of the United States. They attack a large number of plant and tree species, especially hardwoods in Southern California. The number of susceptible trees is five times higher than the sudden oak death.

Usually, they live between the bark and tree surface and bore into wood. They form galleries of fungal spores, also known as circular tunnels. They feed by sucking the tree’s succulent phloem tissues. Thus, they will create a cambium layer between the wood and bark.

However, stressed and injured fruit, shade, and ornamental trees attract them to thrive. After the invasion of Shot Hole Borers in trees and plants, Fusarium Oxysporum will cause wilt disease in hosts. 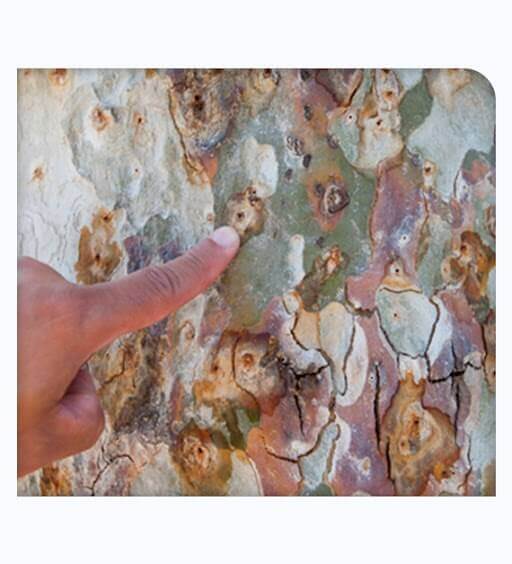 How Can You Get Rid Of Shot Hole Borer

We use various organic methods to treat shot hole borer beetles, which include systematic trunk injection, pesticides, and soil surfactant. We treat severely infested host trees to retain their health and vigor.

We identify the pest symptoms and monitor the damage precisely before suggesting treatment to control the shot hole borer infestation. Our best control strategies based on tree species and the intensity of the spread will help eliminate the fungus effectively.

They are the type of beetle that bore tunnels into the tree and live far from the reach of chemicals and pesticides. They farm fungi for food and can damage or kill the host trees. Furthermore, the pest is tiny and goes unnoticed until the situation is out of hand. Also, the invasion varies as per the different types of host trees.

If the infestation is controllable, yes, we can treat the tree by chipping off the affected area and regularly monitoring and providing the required nutrients. Since shothole borer beetles affect the decaying and dying trees, it may be more practical to completely replace the tree. However, we try to inspect the area well to provide you with a complete report and make sure the damage is less.

First, start with symptom identification, and confirm the infestation. Check the species that are affected by the insect and mark the trees. Find out the areas of the tree that are affected by the infestation. To control the outbreak, cut off the affected branches, remove the deadwood, prunings, etc., from in and around the orchard. Also, chemical control is recommended when the outbreak is huge.